Authentic tradition and festivities this June in Zarautz and Irun

San Pelayo in Zarautz and San Marcial in Irun

Pure tradition and festive atmosphere will live in the towns of Zarautz and Irun this June. 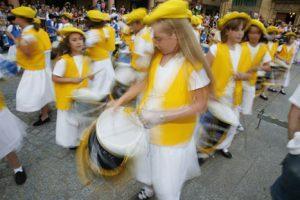 The first event will be the celebration of San Pelayo in Zarautz, where the population turns to live the street parties, dressed in typical attire, tasting more than ever local products, participating in the traditional pilgrimage on the Iñurritza meadow, that congregates a multitude of people, and accompanying the gangs of blouses. The Fiestas de San Pelayo, on the 26th, are responsible for starting the summer season in the town. And there are celebrations from Saturday and Sunday 16 and 17 and from June 24 to 28.
On the eve the children’s show is celebrated, the adult tamborrada (many drums) and the song of the hymn to San Pelayo at midnight to welcome the big day to complete the day.
On the following day, on June 27, the girls and the boys travel around the hamlets of the area accompanied by txistularis (musicians) and accordions collecting funds for food the next day. This is a tradition known as ‘Oilasko Bilketa’.

Every June 30, Irun celebrates the parade of arms, San Marcial Day, a party of the city, commemorating the victory of the troops of Irun on the French during the dawn of June 1522. The battle, which took place in the Peña de Aldabe of Irun, was part of a series of French offensives aimed at controlling the border area of Bidasoa.
For the Irun celebration it is dyed red and white and offers a wide program of activities from June 23 to July 1 with concerts, playgrounds, sports championships, giants and bigheaded ….