65 San Sebastian International Film Festival, from 22 to 30 of September

65 San Sebastian International Film Festival is one of the most important film events in Europe, alongside Cannes and Venice. This year is celebrated from the 22 to the 30 of September and with him the whole national and international cinematographic panorama will return to meet.

A unique moment to enjoy the capital of Gipuzkoa, as it looks more than ever. Also, who knows, maybe you have the opportunity to meet the artists that this year will attend: Monica Bellucci, Ricardo Darín and Agnès Varda who will receive the Donostia Awards; Javier Bardem, Bérénice Bejo, Steve Coogan, Glenn Close, Penélope Cruz, James Franco, Jean-Pierre Léaud, Benoît Magimel, Arnold Schwarzenegger, the Jaeger-LeCoultre Award for Latin American Cinema Paz Vega and Alicia Vikander among others, who have already confirmed attending the festival.

On the other hand, in the section of Culinary Zinema: Cinema and Gastronomy, the documentary “Constructing Albert” is projected on the new project in the life of Albert Adrian, brother of Ferran. ‘El Mirador de Ulia’, a restaurant from San Sebastián, will offer the dinner that accompanies it with the hand of Rubén Trincado, along with Dani López and Gorka Txapartegi.

If you come to San Sebastián, you can not miss it:
• Go pintxos in the neighborhoods of San Sebastián.
• Take a photo with the Bay of La Concha or some famous on the red carpet.
• Take a seven-kilometer walk from the Zurriola beach to the Peine del Viento.

And on the occasion of the film festival, on Friday September 22 will be held ‘Shopping Gauean’, the great festival of fashion and the seventh art. Around 90 shops in the city center and people linked to fashion and cinema come together tonight with live music, catwalks, contests …

How to get tickets for the festival?
The sale of tickets for the sessions of this edition of the festival goes on sale this Sunday, September 17, starting at 9.00. For all sessions through all channels. Zinemaldi Plaza ticket offices (Kursaal ground floor) and Kursaal Center ticket offices (Official Section tickets and purchases of less than 10 tickets) and Internet (www.sansebastianfestival.com and kutxabank).
On Monday, September 11, tickets for the Donostia Awards, opening and closing on the Internet were put on sale. 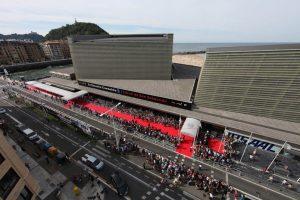