Built at the end of the 15th century, the Church of San Antón is not Bilbao’s oldest, but it is one of the most typical. Standing on the river bank, close to the La Ribera Market and the former city hall, its history is closely tied to the city’s, to the point that the church is depicted, along with the bridge of the same name, on the city’s coat-of-arms.

Nearly three hundred year before the first church was built on this site, a warehouse stood there, built on a rock next to the ford that the caravans loaded with wool from Castile used to cross the river, along with a small port.

When Don Diego López de Haro granted the Municipal Charter to the city in 1300, the old trading exchange was brought into the urban precincts, surrounded by a strong city wall for defence and as flood protections.

The foundations of that city wall have been excavated and you can see them near to the altar, along with the remains of the first church’s chancel. Remains have also been recovered from the old cemetery that was inside the church until the 19th century.

The current church was built in the Gothic style between 1546 and 1548, even though its beautiful frontage is in the Renaissance style and the bell tower is Baroque. The inside is home to interesting works by Luis Paret, Manuel Losada or Guiot de Beaugrant, the author of the wonderful Plateresque altarpiece. 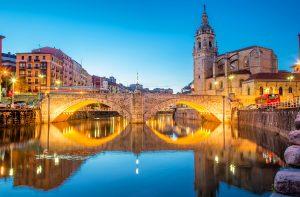