Down through those 90 years, the Bilbao Orkestra Sinfonikoa (BOS) has been active both in Bilbao and Bizkaia and abroad. In July 2003, the BOS, under Juanjo Mena, was invited by Valery Gergiev to perform at St. Petersburg’s Mariinski Theatre as part of the celebrations to mark the city’s 3rd centenary.

The concert marked a milestone in the Orchestra’s international outreach and it is regularly invited to La folle journée (Nantes) and La Roque d’Antheron (Marseille) festivals.

In addition to its chamber and season-holder seasons at the Euskalduna Conference Centre and Music Hall, its outreach to the towns of Bizkaia, its involvement in ABAO operas, and its tours and outings, the Orchestra plays a key educational role: concerts for schools since 1985, an initiative in which it is considered a trial-blazer, family concerts and social inclusion through music activities.

It also has lines of collaboration in place with other cultural institutions, such as the Arriaga Theatre, the Guggenheim Museum Bilbao and Bilbao’s Fine Arts Museum. 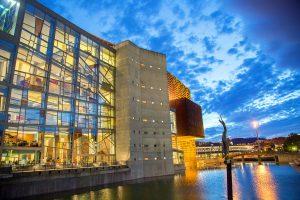